For a further taste of Robert's songwriting and to purchase some of his music, click: here

1. September 2022: Robert was commissioned to write a choral piece for the 2022 West Australian Mass Choir Festival, an annual event at the Perth Concert Hall over several nights featuring 85 schools. The piece, written on the subject of the "Uluru Statement from the Heart, was performed by 450 public school students and a small ensemble including a string quartet.

3. November 2020: Robert was thrilled to join the legendary Aboriginal band "YABU" for a live concert video, the opening of Perth's NAIDOC week, and a short tour of the Goldfields, during which he featured in the YABU band's new video "Cry in the Wind". Robert also performed in Port Hedland with YABU in 2021 and more gigs are upcoming in 2022.

Time for a good ole-fashioned singalong - led by yours truly!

Carols at the Monastery

A family friendly celebration of Christmas carols featuring myself and the wonderful Perth Symphonic Choir under the baton of James Pratt.

I am excited to be MC AND musician for this event!

Honoured to be playing at this event for a dear family memeber. 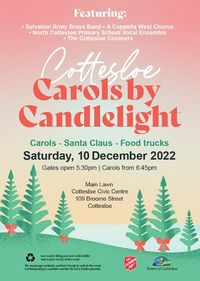 Robert Graham at The Belmont Sports and Rec Club!

Back at the Club!

A very special service for those who are alone, or lonely, this Christmas.

The Cottesloe Crooners at Little Sup!

A nice early start for the Crooners for this one!